Affect of Interest Rates by Ukraine

A "flight to safety" in financial markets refers to the tendency of investors to shift to a more defensive position with relatively safer assets during periods of added uncertainty. There are many reasons why investors may want to reduce the level of risk in their portfolios. When politicians are divided on major issues such as the debt ceiling, and the outcome is unknown, investors may scale back on risk. Similarly, investors will shift assets during periods of stress in financial markets. A massive flight to safety took place when debt troubles in weaker euro zone countries threatened the global banking system.

This week, it was the potential for a military conflict which caused the flight to safety. Over the weekend, Russia moved troops into Ukraine. As a result, global stock markets suffered severe losses on Monday, while mortgage rates showed nice improvement. When Russian President Putin backed off from the use of military force on Tuesday, though, financial markets experienced a complete reversal. Stocks recovered their prior day losses, and mortgage rates increased.

Looking ahead, the next Employment Report will be released on March 7. The consensus is for an increase of 150K jobs in February. Unusually bad February weather again will cause investors to question how well the results reflect the underlying strength of the economy. After the Employment data, attention will turn to Retail Sales. If the situation in Ukraine changes, it could influence mortgage rates as well. 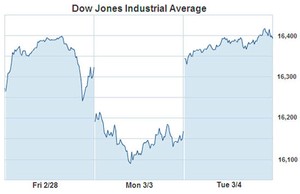